A Redis cluster is simply a data sharding strategy. Sharding is also known as partitioning, it splits the data up by key.

Redis Cluster provides a way to run a Redis installation where data is automatically sharded across multiple Redis nodes.

By running Redis Cluster, we could get:

The second port (16379) is used for the Cluster bus, that is a node-to-node communication channel using a binary protocol for failure detection, configuration update, failover authorization and so forth.

Clients should always communicate with the normal Redis command port (6379). Furthermore, both these two ports must be opened in firewall and be reachable from all the other cluster nodes.

About Redis Cluster and Docker

Currently Redis Cluster does not support NATted environments and in general environments where IP address or TCP ports are remapped.

Docker uses a technique called port mapping: Programs running inside Docker containers may be exposed with a different port against to the one that program believes to be using.

In order to make Docker compatible with Redis Cluster, using the host networking mode of Docker is required. For instance, if you run a container which binds to port 6379 and you use host networking, the container’s application is available on port 6379 on the host’s IP address.

Please check the --net=host option in the Docker documentation for more information.

Redis Cluster does not use consistent hashing (for example Memcached), but a different form of sharding where every key is conceptually part of a hash slot.

Every node in a Redis Cluster is responsible for a subset of the hash slots, so for example you may have a cluster with 3 nodes, where: 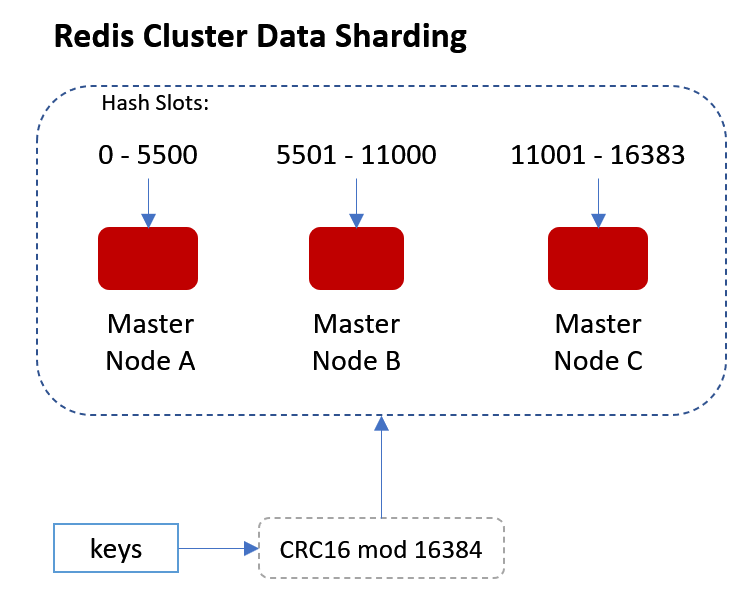 Redis Cluster supports multiple key operations as long as all the keys involved into a single command execution (or whole transaction, or Lua script execution) all belong to the same hash slot.

The user can force multiple keys to be part of the same hash slot by using a concept called hash tags.

While it is possible for many keys to be in the same hash slot, we could check the slot with CLUSTER KEYSLOT command when naming keys.

Hash tags are documented in the Redis Cluster specification, the gist is that only the string between {} curly brackets in a key is hashed, e.g. this{foo}key and another{foo}key are guaranteed to be in the same hash slot, and can be used together in a command with multiple keys as arguments. 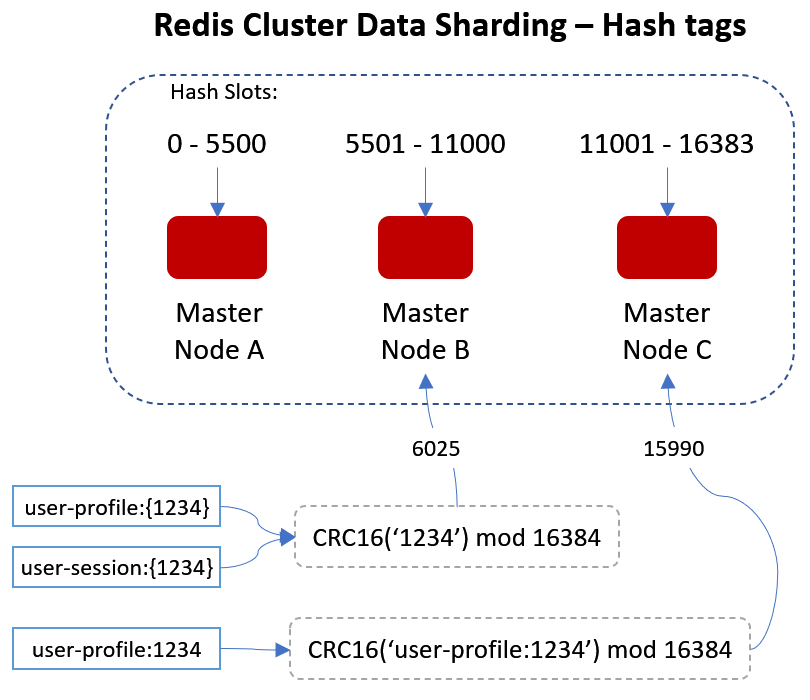 Redis Cluster uses a master-slave model where every hash slot has from 1 (the master node) to N replicas (N - 1 additional slaves nodes).

In the example cluster with nodes A, B, C, if node B fails, the cluster is not able to continue, since the hash slots in the range 5501-11000 has no way to serve anymore.

However, when the cluster is created, we add slave node to every master, so that the final cluster is composed of A, B, C that are masters nodes, and A1, B1, C1 are slaves nodes, the system is able to continue if node B fails.

Node B1 replicates B, when B fails, the cluster will promote node B1 as the new master and will continue to operate correctly.

Note: If nodes B and B1 fail at the same time, Redis Cluster is not able to continue to operate.

Redis Cluster is not able to guarantee strong consistency.

In practical terms, this means that under certain conditions it is possible that Redis Cluster will lose writes that were already acknowledged client by the system.

The first reason why Redis Cluster can lose writes is because asynchronous replication.

The following happens during writes:

The master node does not wait for the acknowledgement from slave nodes before replying to the client, since this would be a prohibitive latency penalty for Redis.

So if the client writes something, but crashes before being able to send the write to its slaves, one of the slaves (that did not receive the write) can be promoted to master, losing the write forever.

Creating and using a Redis Cluster

To create a cluster, we need to have a few Redis instances running in cluster mode. The minimal cluster that works as expected requires to contain at least 3 master nodes.

For the first test, we start a 6 nodes cluster with three masters and slaves.

There is a much simpler system to create a Redis cluster instead of executing instances manually as above.

You can find this script in redis-6.0.7/utils/create-cluster directory in the Redis distribution.